My daughter got her first 2 Tess shorts last summer.

I had allready made her a third one with the scraps from the Oceana skirt during spring.
When Melissa asked het testers to check the new rebranded version of the pattern ... it was time for number 4. She wore all her Tess shorts a lot during Summer and when the sun shows her face in these last days before the Fall sets in ... out they come again :-) 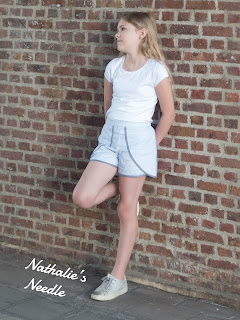 For this last one, my daughter picked a quilting cotton with a subtle gray print. The selvedge says it from the Microlife Textures line by JWylie Designs for Robert Kaufman. She paired with a matching grey bias tape  and we were ready to start cutting and sewing!

Adding the bias tape takes a few extra steps, but it's worth it. I love how it emphasizes the shape of the petals.

I made some pics along the way to show you how I added bias tape. The pattern does tell you were to and when to add trim like a bit of lace or pompons. I remembered struggling a bit with bias tape and piping on my earlier versions. So I made a few pictures about how I applied it.

The pattern tells you to hem a little part of the petal in step 5. That's when I start the bias tape.

If you pinned carefully the stitching in the ditch will catch the back of the tape. When you pin you should mind that the side of the tape overlaps the stitches from the first picture. Stitch the first step a few inches further than the second and you can continue to apply the tape all the way around in step 13.

I also do the side seam in 2 parts so I can fold the bias taped hem out of the way in step 13.

There will be a long end of bias tape hanging out of the project for a while but that's just life. Just keep in mind that it's there and you won't sew it into the pockets or on the backside etc. I like to finish one leg completely steps 5 through 13 before I start on leg number 2 because 2 strings of bias tape hanging out while you are sewing ... that's asking for a tangled mess ;-)

If you want to give the pattern a try, head over to the BSD website! 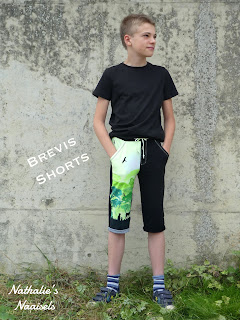 My son needed shorts ... he needed them bad. And I was not ready to face stores with him again. My son is what I call the "butt-less" type. Buying pants usually goes like this: "too wide", "too short", "ugly color" and "do you really expect me to wear that"? He's growing like crazy. His pants last one season if I'm lucky. After that they are too short. I had allready chopped off the legs of a few joggers to help him get through the first days of a heat wave, but that will only get you so far. Time to get in to sewing mode. The universe decided to lend this mom a hand and sent a pattern test for shorts my way: BREVIS by Sofilantjes. That's actually Latin for short, so what name could be better?

I showed him the picture and his response was " that looks kind of ok". That is teenage speak for: "That's great mom, you can make one for me."
I registered for the pretest and Yvette let me help. Usually it's Anne pulling the strings at Sofilantjes  but Yvette from the Droomstoffen webshop teamed up with Sofilantjes as a designer. Her first test, her first release and she was nervous. Who wouldn't be? I think she did an awesome job.

The pattern comes in 2 versions: version B hits above the knee with nice biker shorts knee pieces.
We went for version A: a tad longer without the colorblocking. 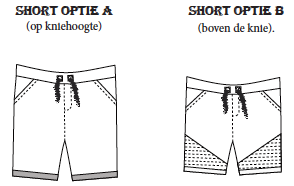 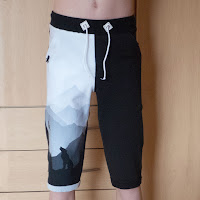 Step two in the testing proces is hitting the fabric stash, especially for a pretest. I stumbled upon a few scraps of Wild Shadows panels and just enough black See You At Six french terry.
I had little to lose with the wolves panel, as the scrap was not wide enough for another sweater anyway. My son helped my to position the wolf just were he wanted it and he was very pleased with the results.

I got assigned to blend the 9y hip with 14y length. Remember the butt-less comment? The pocket were a tad to narrow when blended over 4 sizes in length. That's what tests are for: the blending instructions now clearly state which width to stick to in that case.

My son immediately agreed to make another pair in the full test of the pattern. He even wanted to go to the fabric store to get more black fabric. (You read that part about my son and shops right? That is nothing short of a miracle) Plain black was his plan. And then we passed Wild Shadows remnants: lions? monkeys? We picked up some of both, because you don't argue with shop-allergic teens when they suggest a fabric. You just enjoy the moment they get excited about fabric.

When we got home I saw this print did not have a french terry base, but T-shirt weight knit. The difference in weight was not that big, so I gave it a go. He loved the result. Both the Wolf and the Monkey shorts went from his body to the laundry and back all summer. They did not see the inside of the wardrobe. Definitely a winner! 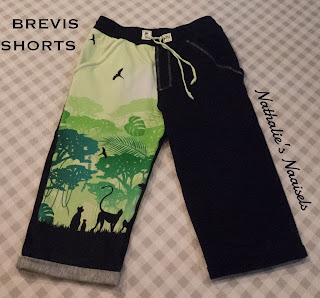 This story sounds like nothing ever goes wrong with sewing over here. But let me show you that Murphy also walks into this house.
The green shorts were supposed to feature a gorilla. Those little monkeys sure aren't gorilla's, right?
Well, that's because this happened when I put the gorilla where my son wanted it. I should have known. That is one very unlucky pattern placement, right. The bird flying into the fly looking like something else coming out. I could not send my son out into the world with that on his crotch, right? Time for some seam ripping and a new leg front. 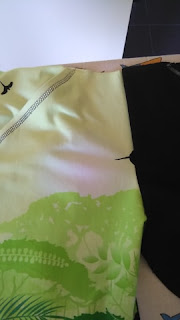 I tried to salvage the "oops-leg" by making shorts for my nephew. He's only 5, so the bird did not cause any issues. I made a picture of them twinning on our holiday in Switzerland. They do look cute together, right? 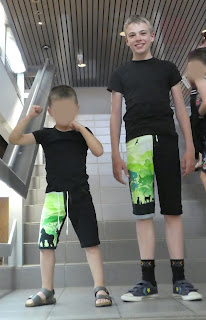 Do you want to make one (or ten) for the boys in your life? Check out the Sofilantjes page for your copy (€7 without VAT)

disclaimer: If you buy it with one of the links, I get a small affiliate commission. You don't have to pay a cent more.

The second test in my work free week, was one for Sofilantjes Patterns: Velocitas Hoodie.
My collection of Sofilantjes patterns is quite large. This was the first designer I ever dared to fill out a tester application for. I tried a few times, but never got picked ...  until now! I was happy I got to test for Anne and my daughter was not objecting to a new hoodie. 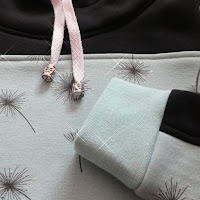 We went to the fabric store in search of red fabric and off course we came home with another combination. Stoffen Van Leuven will do that to you ;-)
We ended up with a mintgreen "happy fleece" (or maybe i should call it fleece lined sweater fabric) sprinkled with glitter.

If the fabric has glitter, we might as well go all out on the glitter front, right? We got ribbing and cord with glitter and some silver cord stops.

During a weeklong school holiday, I filled out two forms for pattern testing. One for a company that had turned me down a few times before and another one in a group I must have joined for a contest and forgot about. I did not expect to get picked by either of them and forgot about the forms. Until I found acceptance e-mails for both tests on the same day ... oops: no more chilling out!

This is the first result, the other pattern is launching tomorrow ;-) 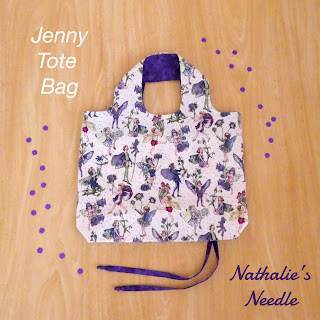 Lauren (Sew By Pattern Pieces) is launching the #11600 Jenny Tote Bag in honor of her mother. She passed away last year due to pancreatic cancer. Half of the proceeds from this pattern will be donated to Pancare Foundation, which finances cancer research in Australia. 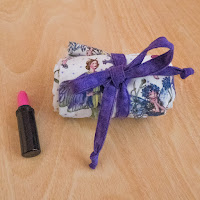 The pattern is available in 4 different sizes (S/M/L/XL):
from a cute gift bag right up to a spacious beach bag..

For easy storage the bags can be rolled up and closed by 3 different fastening methods: Ties, straps with a snap and an elastic.

The smaller model offers a choice between short or long handles.  The shorter handle is meant for children. The longer version allows an adult to carry the bag on the shoulder.

I picked a small, with short handled and ties closure. 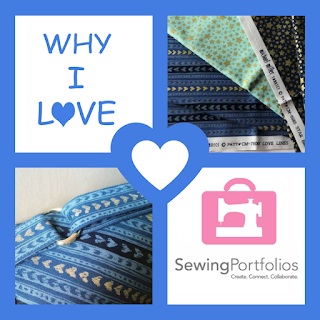